Looking for the perfect sports program?

Alexander is one of the founders of TAC Sports and the soccer academy. His life mission is his commitment to create a soccer academy that helps develop children and athletes into confident players and leaders. His passion has always been sports, health and physical activity, and he developed an absolute obsession with soccer and sport development at 13 years of age. Alexander graduated from York University with a B.A in Kinesiology and Sports Psychology. He takes pleasure in designing the best possible programs and systems for TAC Sports. Alexander is a NCCP Learn to Train and Barcelona Coaching certified coach, teaching soccer for over 10 years.  Alexander is fluent in English and Italian, and is adept in both Spanish and French.

Adib is the Director of Operations at TAC Sports. His passion for sports is rooted in his own experience as a developing junior player. He comes with an extensive athletic background as a former student-athlete and as a supervisor of internal and external affairs within intercollegiate athletics for soccer and tennis. He has been a member of the varsity team at York University, earning him the Ontario University Athletics championships with the York Lions in 2011. In addition to his high quality work with various teams, Adib manages a terrific sports program and is excited to apply his knowledge to TAC Sports programs and community-based organizations. He takes pride in working at TAC Sports and in his ability to provide youth with high-quality sports and education programs. Adib is fluent in English and Farsi. 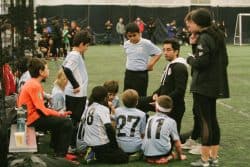 Hassan has his Asian Federation A License and has coached for over 25 years in Korea, Japan, Iran and Canada. He is fluent in over 6 languages and is the technical director for TAFC

Coach Ramon McIntosh has a passion for life expression through sports; specifically building community through soccer. Ramon possesses extensive playing and coaching experience, loves player and people development and is eager to overcome all challenges together at TAC Sports.

Between 2012 and 2016 Ramon served as an Assistant and Goal keeper coach for the Women’s Varsity Soccer team at UOIT. The program reached the playoffs each year and the OUA West Semi-Finals in Season 2. Appearing in 2 National Championships winning Provincial Bronze and Gold medals while claiming Bronze at the CIS National Championships.

Over the past few years Ramon has worked as a Head Coach at Durham College, as Head Coach of Player and Coach Development for Richmond Hill Soccer Club while obtaining coaching experience in League One Ontario working with SanJaxx Soccer.

Abdullah has a degree in Kinesiology and Sports psychology and many years coaching as a head soccer coach. Abdullah serves as team Admin Exec.

Tai Simm-Smith has been coaching for over 25 years for Regent Park, Cherry Beach and has played at semi-professional in the summer.

Your message has been received.